My thinking of Nova-network HA 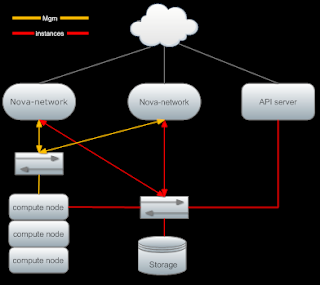 Note: I forgot to draw a VIP for nova-network hosts public Virtual IP

Two network nodes for OPENSTACK.
The HA solution for nova-network , I focus on a direction of "Router HA".
I found VRRP & GLBP protocols.
But GLBP is private protocol of CISCO......
Three VRRP in nova-network ....
EX.
NIC1 VRRP for instance network
NIC2 VRRP for Mgm network
NIC0 VRRP for Public network
In normal situation , node1 handle instance traffic , and node2 handle Mgm network
A working flow of running a instance
[API]----->[RabbitMQ]------>[node2 query rabbitMQ]------>[scheduler]------>[compute node]------>[instance DHCP request from node1]------>[instance get metadata from node1 redirect to API server].
Question:
1. Could I set same hostname for two network-nodes? bcz nova check hostname for component's job.
Btw, I'm awaiting for new release of OPENSTACK NOVA. In Diablo release , Compute node will redirect 169.254.169.254 to API server , instead of from nova-network(instance's gateway). If instance can route from a real router will be better . But I think the problem is how to assign public ip for instance is another course. In my consideration, that will be very hard to handle floating_ip.
OR another choice is figure a better HA for nova-network. But it's a role as router in NOVA. That's a technical challenge . In my research , GLBP is a good protocol .
OpenStack