April 15, 2011
OpenStack-Dashboard
Code base has been moved to GitHub
https://github.com/4p/openstack-dashboard 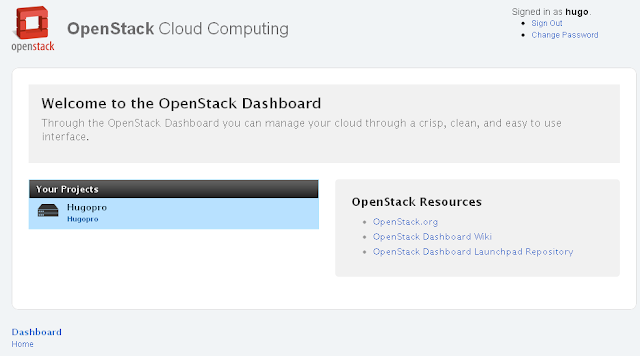 You can use a dashboard interface with an OpenStack Compute installation with a web-based console provided by the Openstack-Dashboard and Django-Nova projects. Together they provide a reference implementation of a Django site that provides web-based interactions with the OpenStack Compute cloud controller. For more information about the Django-Nova project, please visit: http://launchpad.net/django-nova. These instructions are for a test deployment of an OpenStack Dashboard. They configure your dashboard to use a sqlite3 database and the default Django server. To create a more robust, production-ready installation, you would configure this with an Apache web server and MySQL/Postgres database.
Installation Steps

Before you begin, you must have bazaar installed. It's straightforward to install it with sudo apt-get install bzr.

You now have a directory named trunk containing the dashboard application as well as code for the look and feel.
(Optional) Build django-nova #非開發用途可跳過此步驟
If you want to develop upon or modify the inner workings of django-nova, you'll want to build this reference implementation. If not, proceed to building the OpenStack Dashboard itself.

Here is how you build the reference implementation that the dashboard uses:

cd ../django-nova/trunk
python bootstrap.py
bin/buildout
These two commands (bootstrap.py and buildout) install all the dependencies of django-nova.
Next we will create the virtualenv for local development. A tool is included in the openstack-dashboard project to create one for you. Switch to the /src/openstack-dashboard/trunk directory and then enter:

In the new copy of the local_settings.py file, change these important options:
NOVA_DEFAULT_ENDPOINT : this needs to be set to nova-api instance URL from above. You can use 'http://localhost:8773/services/Cloud' if you plan to view the dashboard on the same machine as your nova-api.

NOVA_ACCESS_KEY : this should be the EC2_ACCESS_KEY in your novarc file (which includes the project name).

NOVA_SECRET_KEY : this should be the EC2_SECRET_KEY in your novarc file.
If you are using an admin user that is named something other than "admin", add the following two options to the local_settings.py file. In this example, the admin user is named "osadmin".

NOVA_PROJECT = 'osadmin'
One additional option is available in the local_settings.py file, the default region. This can be set to anything, but is set to nova by default.

Now install the openstack-dashboard environment. This installs all the dependencies for openstack-dashboard (including the django-nova from earlier). If you don't already have
easy_install installed, use sudo apt-get install python-setuptools.
sudo easy_install virtualenv
python tools/install_venv.py ../../django-nova/trunk
This step takes some time since it downloads a number of dependencies.
Once the download completes, create the database and insert the credentials for your Nova
user:tools/with_venv.sh dashboard/manage.py syncdb

Midway through the script, you are asked, "You just installed Django's auth system, which means you don't have any superusers defined. Would you like to create one now? (yes/no):" Answer Yes, and insert these values as shown:
Username (Leave blank to use 'root'): *ENTER YOUR NOVA_ADMIN-LEVEL_USERNAME FROM NOVARC*
E-mail address: *ENTER YOUR EMAIL ADDRESS*
Password: *MAKE UP A PASSWORD*
Password (again): *REPEAT YOUR PASSWORD*
Once this configuration is complete, you should be returned to the prompt with no errors. If you get 403 errors, it probably means the user is undefined. Check the nova-api log file (typically /var/log/nova/nova-api.log) for specifics.

Run the Server
Now run the built-in server on a high port value so that you can validate the installation.tools/with_venv.sh dashboard/manage.py runserver 0.0.0.0:8000 #DMZ 區請NAT 80port 到此位址

Make sure that your firewall isn't blocking TCP/8000 and just point your browser at this server on port 8000. If you are running the server on the same machine as your browser, this would be "http://localhost:8000". 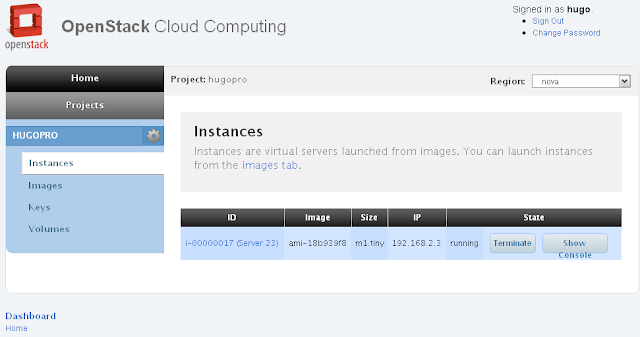